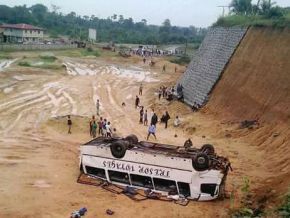 Was this picture taken in Douala?

It is said that this picture is from a road accident at Bekoko, around the western end of Douala. True?

A 70-seat bus of Trésor voyage truly fell from the interchange while the driver was trying to exit the western side of Douala, going to Bafoussam. This happened on Friday, November 10, 2017, at Bonabéri, a popular neighborhood in Douala. During the accident, there were no death, only some people injured while some suffered from hardened muscles.

Trésor Voyages is one of the 30 transport companies which operates without a license that Edgar Alain Mebe Ngo’o, the Cameroonian minister of transport, identified recently. In his press release published on October 30, 2017, soon after the road accident which involved General Express, the minister gave these companies one month to comply with the regulations. The accident killed 15 people, according to official data.

Trésor Voyages, the company whose bus was involved now, was previously known as Kami Voyages until it changed its name after many road blunders.

Video of the accident :