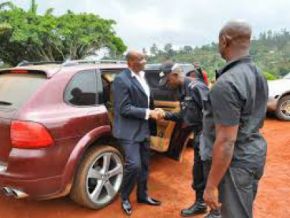 Has Jean Pierre Saah been arrested in the Philippines?

Some internet users are sharing a video, claiming that the businessman has been arrested for feymania. True?

Once again, there are bizarre rumors about Jean Pierre Saah, a former music producer. After the rumors which claim that his eyes had been put out, there is another one saying he has been arrested in the Philippines for feymania (a Cameroonian term for fraud).

However, from Douala to Yaoundé and its environs, the businessman is going wherever his business takes him, according to credible sources.

Furthermore, unlike what is being said, he can’t be seen in the video being shown as proof of the allegation. Many people want to see him in the video but the name of the man in there is clearly written. It is Benjamin Miendje.

In 2014, he was said to have been arrested in the United Arab Emirates following a fraud scheme which went awry. The rumors claim that his eyes were put out and arms cut as is the law in that country. So here he is, reappearing miraculously with both eyes and arms, meaning that all these claims were just a fruit of people’s imagination.

Nevertheless, for more than a decade, JPS Production has been in hibernation due to financial and fiscal difficulties.