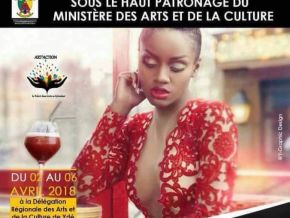 Is the event advertised on this image really sponsored by the ministry of arts?

Many people criticize the ministry of arts because of this image on which Nathalie Koah adopted a provocative pose. Are they right?

Many internet users are furious because it is claimed that the ministry of arts is a sponsor of the event advertised on this poster. According to them, the poster violates the good community standards. Indeed, on this poster, Nathalie Koah, Samuel Eto’o's well-known ex-girlfriend, is seen wearing a low neckline. Due to this, the event couldn’t be a decent event to be sponsored.

To appease the citizens, the minister of arts published a statement to decline its participation in this event. Also, Art’Action, the association which initiated the event designed a new visual in which it informed that it is sponsored by Psychee by NK, Nathalie Koah’s company.

According to a member of the steering committee, all these are due to the sponsor’s reputation. Because of that, the event won’t be held at the Yaoundé’s representation of the art ministry (which hosted the first edition) as it was announced on the first visual. “We are looking for another site”, Art’Action reassured.