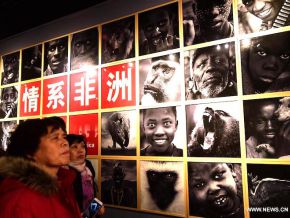 Some people say that the pictures were removed but the petition is still online.

A petition named “NON Les NOIRS ne sont pas des Animaux” (black people are not animals) was posted on October 9, 2017, on www.change.org by Armelle Moutsinga, a Gabonese. The petition has been shared by many Africans, Cameroonians comprised.

Edward E. Duke, a Nigerian, was the first African to share a video along with some pictures, of photo exhibited in the galleries of the Museum of China’s capital at Wuhan, on Instagram. His goal was to raise awareness on the racism boldly depicted by the pictures. The petition was then posted, some days after the buzz around these pictures erupted, asking for the removal of these photos and to raise awareness of such practices.

The pictures taken by a Chinese photographer in the name of Yu Huiping, exhibited since January 2016 and scheduled to be taken off on October 11, 2017, show African faces placed side by side with images of animals. According to explanations the photographer provided to a Kenyan student, the exhibition’s goal was to “showcase totem animals in Chinese culture alongside African”. But, there was a giraffe among these animals and, even though the photos were removed, neither the photographer nor the museum made public apologies.

The petition is still being shared on social media. Indeed, since it was posted, more than 4 days ago, it has gathered, at the time we published this article, 6,777 supporters and only needed 723 more supporters.