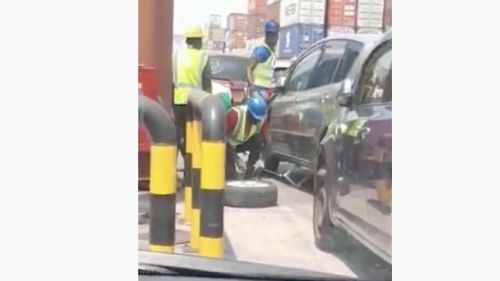 No, the video showing port agents substituting a car’s aluminum rim was not shot at Douala-Bonabéri port

Some people claim that the people seen in the video are Cameroonian dockers stealing the aluminum rims of a car. Is it true?

Currently, a viral video is being shared by internet users in Cameroon. In the video, people can be seen, at a port, changing a car’s rims. "At Douala port, when your car comes with aluminum rims, the rims get stolen": this was the illustration following the 1 min 56-sec video.

An internet search shows that the original video was referring to dockers working at Mombasa port in Kenya.

Douala port’s authority indicates that at the port’s container terminal, cars are not handled at the containers’ aisles. In addition, the terminal’s pillars are encased in concrete, not directly put on the ground as the video shows. In addition, the pillars have red and white colors. Also, the authority informs, Douala’s port gates are currently painted in blue and white colors (and will remain so till December 31, 2019), not in black and yellow as the video shows.