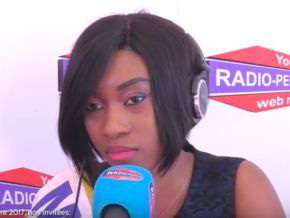 No, Caroline Nseke was not Miss Cameroon when she made the mistake

It is said that the newly elected Miss Cameroon made a mistake in the national anthem during an interview with a local radio.

In conversations since this morning, January 16, 2018, it seems that the newly elected Miss Cameroon made a mistake in the anthem of the country she is supposed to represent.

However, if the video showing Aimée Caroline NSEKE, the Miss, while she was singing the anthem is genuine, it did not happen in the context it is being placed.

The video which is extensively shared is, in fact, part of an interview conducted on October 16, 2017, with Studio Radio People LIVE, a Swiss radio.

At that moment, she was Miss Cameroun –Suisse 2017 (her terms had even expired at that time) and candidate to Miss Cameroon 2018.  That day, with Manuela Oppikofer, a model, and coach for Misses and Philippe Jung, journalist, she was the host of La libre antenne.

During the interview, Aimée Caroline NSEKE narrated her story and the first ten years she spent in Cameroon. She also recounted the national anthem and the sense of patriotism being taught in primary schools. At the 5’17 minute, the interviewer asked her to sing the Anthem but, she confessed that she could not sing the whole part. Yet, she agreed to sing and this is what we got…

Since the video was leaked to social media, many people are outraged of the country’s image she had trampled and post with the hashtag “Miss Cameroun 2018”.