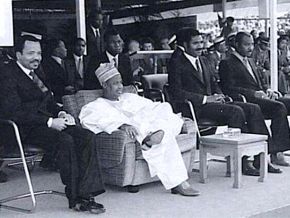 No, Philemon Yang is not in this picture !

People claim that it is the current prime minister at the left of the then president Ahmadou Ahidjo during the commissioning of Song Loulou dam. True?

The image was shot during the inauguration of Song Loulou dam not far from Douala on November 14, 1981. The inauguration was presided by president Ahmadou Ahidjo (who died in 1989). Paul Biya was at his right. The man at the left side who is presented as the current prime minister Philemon Yang though he is as bearded as the minister is EKEDI SAMNICK (who died in 2002).

“Actually, it is my aunt’s late husband  M. EKEDI SAMNICK, who died in 2002. At the time, he was president Ahidjo’s advisor. He has also been Cameroon’s ambassador to Germany  and president of the management board of Sonel which became ENEO. This was the reason why he attended the inauguration of Song Loulou dam”, Hervé Moukoury, a journalist said.

That being said, let’s note that at that time Philémon Yang was the energy and mines minister but he is not on this image.

For the record Song Loulou (388 MW) is the first dam in Cameroon. After that Lagdo dam was built.