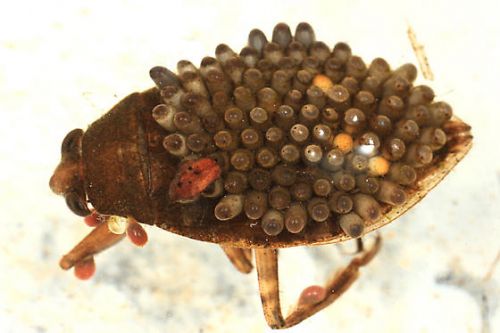 Is belostoma harmful to humans?

A WhatsApp message is being shared warning against such an insect. Is the message right?

On WhatsApp, a new caution is being shared by users. On one side, there is an insect covered with what looks like pustules. Beside that insect, there is an image that will revulse sensitive persons: a foot sole with holes all over. On top of those two images, there is a brief caption in French warning not to kill the insect shown in the picture with bare feet since it is already in Africa. Though the message does not explain which infections this insect might pass to whoever touches it with ther bare foot, the image shows how dangerous it is.

It is a hoax, however. It was posted for the first time in January 2016. According to the Italian fact-checking website http://www.bufala.it/, it was published by an air-conditioning technician on the French web. In his post, the technician claimed that the insect was, in fact, a deadly virus discovered in India. He further warned not to have any contact with it or touch it with bare hands.

In his post, the author used the image of a hand to illustrate his claims. It was however discovered that the image was taken from the Youtube video posted by a Dutch special effects make-up artist Cynthia Koning on her channel QUEENKINGSFX. In her video, the artist explained how to conceive a make-up frightening enough for those who have Trypophobia (a sickness not yet recognized by scientists which translates into intense, irrational fear, or anxiety at the sight of an irregular cluster of small holes or bumps).

In the African version of this hoax, the poster used the image of a foot sole to illustrate the caution. This image is usually used to illustrate publications discussing Trypophobia.

As far as the insect presented is concerned, let’s note that it is belostoma, a giant and oval water bug of the Belostomatidae family. It can reach 30 millimeters long and is found in North America, South Africa and in India.

The specie presented in the image is a male. What seems like pustules on its back are eggs (the females usually lay their eggs on the males’ back to ensure that the eggs are better aerated and protected until they hatch.

belostoma can bite if it is harassed but usually, it rests still as if it is dead when it is captured and generally, it is harmless. A fierce predator, it eats aquatic arthropods, snails, smaller fishes, grubs, adult frogs, and toads.