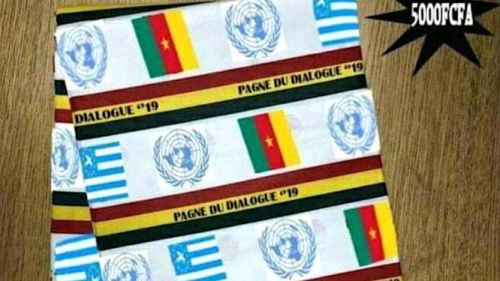 Beware, there is no cloth specifically designed for the announced national dialogue

A picture of a loincloth allegedly designed by Cicam for the coming national dialogue is being shared online. Did Cicam really design this cloth?

During a much-awaited address to the nation on September 10, 2019, Paul Biya, President of Cameroon, announced a national dialogue that should be held by end September 2019, to find a solution to the socio-political crisis affecting the North-west and South-west since end 2016.

A while after that announcement, a sample of cloth surfaced online. According to social media users, this loincloth has been specially designed for the dialogue and is being sold by Cotonnière industrielle du Cameroun (Cicam), the main textile manufacturer in the country. It is allegedly sold at XAF5,000.

The only issue is that this could not be found in Cicam’s points of sale in Yaoundé. This shows that it is a prank. In addition, sources within Cicam indicate that the company has not designed such cloth.

Let’s note that these types of pranks abound on social media. In April 2019 for instance, there was one claiming that a cloth had been designed for the fire that burnt the  “Notre-Dame” cathedral in Paris, France on April 15, 2019. It later appeared that it was just a joke.