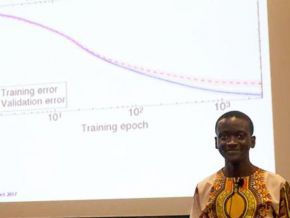 The young man published denials on Facebook and on Equinoxe TV.

Following our publication to deny the claim that Arsene Stephane Tema Biwolé was not working for the NASA, the young Cameroonian has contacted us through our Facebook page to set the records straight.

In his message, Arsene Stephane Tema Biwolé confirmed that he was not working for the NASA. He also indicated that he had also published a statement via Equinoxe TV. This statement had been read during the Balafon show. On January 11, 2018, he published a post on his Facebook page to deny the claims.

“I have never been recruited by NASA, the misinformation is due to the fact that I collaborate with NASA, in the framework of my work on turbulences and wind-generated currents in the thermonuclear plasmas. This specific aspect of nuclear physics being of interest to astronauts which observe similar occurrences in space. As scientists, we cultivate the rigor of truth that is why I had to clarify things. I am not a rock-star I cannot rejoice of a buzz or a popularity if it is not true”, he wrote.

The young physicist has been recruited by a university but, he preferred not to disclose the name of that university in order not to spark new rumors. He also disclosed that he expected to make a living from his passion and pursue a career in teaching.

Here is the published denial :