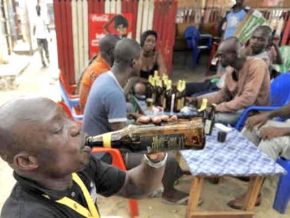 It is true: longes are closed by 9 PM in Dschang!

It is said that by 9 PM in Dschang, it is no more possible to find an open lounge. True?

On May 14, 2018, the sub-prefect of Dschang stated in a radio statement that at 9 PM lounges and drinking parlors should close but failed to provide the effective date by which the measure will be canceled.

The promoters who will go against the order will have their bar shut, he says. This decision could be part of the measure taken by authorities, as the national unity will be celebrated on May 20, 2018, in an environment marked by socio-political tensions in the Northwest and in the Southwest.

The man also suspends the movement of motorbikes in the main towns of Menoua, namely, Dschang, Fongo-tongo, Nkong-Ni, Santchou. In other towns and villages, the motorcycle drivers can freely pass between 5 AM and 10 PM.