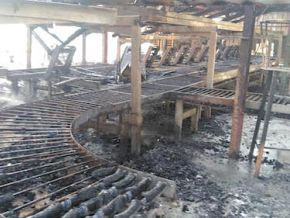 Yes, part of Plantation du Haut Penja was burnt down in Tiko!

It is said that these images illustrate the extent of the fire that destroyed the subsidiary of the French group Compagnie fruitière. Is it true?

In the night of Saturday 14, July 2018 to Sunday 15, some offices and the packaging plant of Plantations du Haut Penja (PHP) in Tiko, Southwest Cameroon were burned down.

When interviewed, our source at Tiko informed that truly, PHP has a small plantation in the area. However, the rumors according to which the fire was caused by secessionists can not be proved. A credible source who required anonymity explained that for the time being, nobody knows the cause.

"Those accusing the Ambazonia and the separatists to be the culprits are free to say whatever they want and are responsible for their claims. An investigation has been launched in the meantime”, the source said.

Indeed, for some people, this act occured because of the hatred the separatists have for all the French companies in Cameroon.