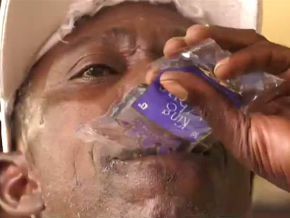 Are sachet whisky prohibited in Cameroon?

Some people say that this drink which is available everywhere is actually prohibited. True?

The prohibition was enacted in 2004 by a joint decree of the ministry of industries and commerce and the ministry of public health. It was based on a research by a commission on quality and standards (Anor) which proved that the ratio of methyl alcohol is high in sachet whiskeys. Methyl alcohol is very harmful to the human body system, the nervous system particularly.

The joint decree allowed a two year’s moratorium to sachet and canister whisky producers to stop the production.

The decree should have been effective since September 2016. But, here we are in 2017 and “King Arthur”, “Kitoko”, “Lion d'Or” and many sachet whisky brands are being sold and drank freely.

On August 16, 2017, the Minister for Territorial Administration and Decentralization called on the district governors. Indeed, in a letter signed, by his general secretary, the minister ordered the effective application of the decree.