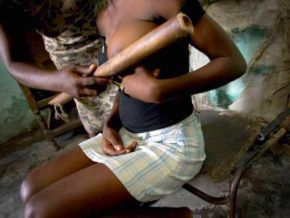 Do parents flatten the daughters’ chest to prevent teenage pregnancies in Cameroon?

It is said that such practice remains widespread not only in villages but in towns as well.

Some parents in  Cameroon think that it is risky for a girl between 10-15 to develop full breasts because she can get pregnant earlier. So, to prevent early pregnancies, mothers flatten their daughters’ chest with hot stone or spatula; they repeat the operation till the girl’s chest is flat.

It is common in villages and in towns as well. In 2013, a research conducted by Cameroon’s Institute for Research, socioeconomic development, and Communication (IRESCO), for GIZ  revealed that "despite efforts to combat violence against women, the practice called repassage des seins is still practiced in Cameroon”. The report pointed out that the practice was less popular at the time of the study compared to its popularity in 2005. Indeed, in 2005, 23.8% of parents in Cameroon practice it but, in 2013 it was 11.8%.

So, chest flattening is still practiced in Cameroon despite the awareness campaigns by groups such as the national association of aunties  (Réseau National des Association des Tantines -RENATA). Its members, mostly women who have been the victim of violence against women, always warn of the psychological and physical damages, like breast anomalies, chest flattening could have on victims.