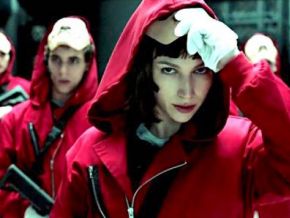 It is true : there is a scene mentioning Cameroon in the TV series “La Casa del Papel”

Two days ago, Cameroonian twitter users claimed that Cameroon was honored in a cult series broadcasted on Netflix. True?

On April 16, 2018, the excerpt of an episode of the Spanish series La Casa del Papel made the buzz on Twitter. The reason for this was that it mentioned Cameroon. Indeed, in the excerpt, the characters are seated at a table discussing a fictitious football World cup final between Brazil and Cameroon and most of them said that they would prefer that Cameroon win the game. They then improvised a song with Cameroon being the only lyrics and offered a toast for the country.

Some people claim that it is an adaptation realized by Cameroonians as they did with the film Black panther here. This is not the case, however. The excerpt is from the third episode of Season 2 and it was streamed on 6 April 2018 on Netflix.

“Casa del papel” is a Spanish TV series of fifteen episodes (2 seasons) that relates the story of eight criminals who want to steal €2.4 billion from Madrid royal bank.

This thriller was created by Alex Pina for the Spanish channel Antena 3 and it was broadcasted for the first time on December 25, 2017.

Let’s remind that Netflix is the world's leading internet TV that continually streams films and series.