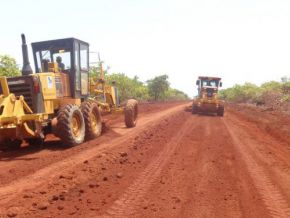 Staff working on Yaoundé-Douala highway project are on strike, again

The workers are supposedly complaining of being maltreated by their employer.

Though it officially said nothing about it, China First Highway Engineering Company Ltd (CFHEC) is registering another strike at its Yaoundé-Douala (215km) highway project.

According to the National Labour Confederation (CCT), the strike started on September 15, 2017.

Antoinette Mebiame, CCT’s President, in fact revealed that a warning note was sent to CFHEC and the minister of labor, Gregoire Owona. “Since top executives of China First Company, which is in charge building the Douala –Yaoundé highway, refused dialogue to discuss our demands, the members of the Mfoundi construction workers syndicate are beginning a strike starting from September 15,” said Mebiame.

The president added that the strike occurs as various abuses have been caused by the employer. These include non-payment of wages, abusive dismissals, non-respect of collective convention, and arbitrary arrests by the gendarmerie company commander, among others.

Before the actual strike, the Chinese firm had already put works on hold at the site, in April 2017, for payment default but however restarted activities in June.