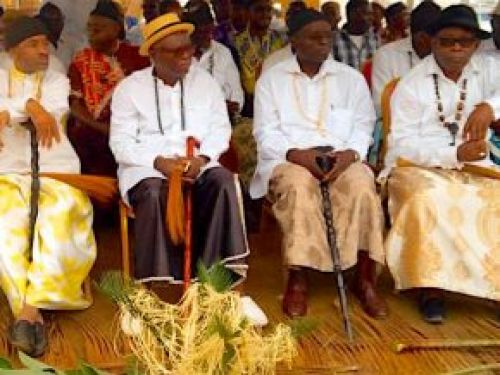 Yes, the Ngondo is pleading for the 13 dismissed headmasters!

An unofficial record reports the grievances enumerated by this assembly of traditional chiefs during a meeting held on September 14, 2018. Is this record authentic?

The record of that meeting between the dismissed headmasters and the traditional chiefs were leaked on social media and its authenticity was questioned. However, many sources attested that the meeting did happen and the leaked records are true. On the record, the traditional chiefs’ anger toward the new minister and some of her staff are expressed.

According to the chiefs, the appointment she made did not take into account the sociological environment. They complained about the high amounts demanded by headmasters who are not from the Sawa ethnic group as school entrance fees. They also pointed out that the minister appointed 4 headmasters from the Southwest (where Nalova Lyonga Pauline is from) at the expense of Wouri - born individuals who are exceptional and off scale teachers.

Finally "the Ngondo bureau promised the dismissed headmasters that they will submit the case to the general secretary of the presidency and the minister of arts and culture" (Ferdinand Ngoh Ngoh and Narcisse Mouelle Kombi, respectively, who are both sawa)  during the audiences that are to be held in Yaoundé on September 18, 2018.

This statement that looks like identity closure follows the uproar they created in May 2018 after they destroyed a monument consecrated to the nationalist Um Nyobe.