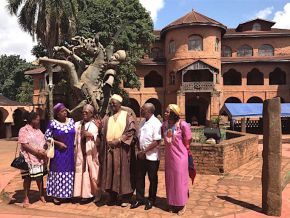 It is true that Foumban royal palace is an architectural gem but, it has not yet been recognized by UNESCO as a world heritage. Two Cameroonians sites have already been admitted on that highly selective list. They are namely Dja wildlife reserves, created in 1959 in the southwestern region, and Sangha Tri-national forest complex which extends from the southeastern region of Cameroon to Congo and Central Africa. Meanwhile, Cameroon has submitted 12 other sites to be recognized. They include Bafut chieftaincy, Lobé falls, and Waza national park.

Indeed, to be included on the list of legacies whose protection is essential to the world, a site must meet at least one of the ten specific criteria set by UNESCO. For instance, “to be an outstanding example of a type of building, architectural or technological ensemble or landscape which illustrates (a) significant stage(s) in human history", the site “must contain superlative natural phenomena or areas of exceptional natural beauty and aesthetic importance”.

The Bamoun palace, built in 1917, which host the former royal museum is fantastically rich of the history of Bamoun people. It traces the saga of their kings, their heroes and the basis of their culture. However, its recognition is not on the agenda. The confusion is visibly due to the fact that the palace benefited from a vast renovation program initiated by UNESCO in 1980. http://unesdoc.unesco.org/images/0004/000447/044704fb.pdf