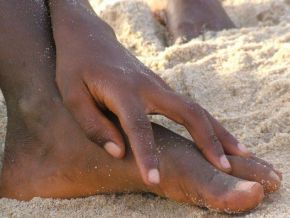 Is it true that when you hit your foot, somebody is talking about you?

This belief is widespread in Cameroon.

One of the superstitions you will be told in Cameroon is that when you inadvertently hit your foot while walking, this means someone is talking of you.

“This is one of our beliefs as bassa, I can’t tell where exactly it comes from but in my village, there is a saying for this. ‘Mbalè  mbômda ba yé pohôl wê hôma ‘. When you hit your foot, it means that people are talking about you somewhere, it doesn’t matter the type of conversation they are having about you (be it good or bad)”, said Victor S., a septuagenarian from Nyong et Kellé in the central region.

Aude K., 31, from the West said, “It is commonly said on our side. When you hit your foot or when you bite your tongue, it means that people are talking about you and it generally means bad things. As far as I’m concerned, I’m not superstitious so I don’t pay attention to these things”.

Such testimonies, you can hear them around the country if you ask. It seems incredible for those who don’t believe it. An example is Guy M., who said :

“How can such things be possible ? Generally, you can’t see those people who are talking about you when you hit your leg. So, how did those who claim this find such a story? Why can’t they find a simple explanation like you were not careful enough?”

It’s all mysteries. The fact remains so whether you believe it or not.