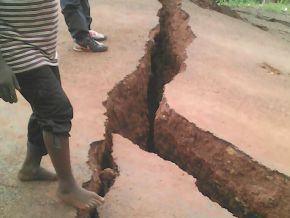 Could these images really be from the crumbled road of Ebombè?

It is said that this axis got split in two yesterday, just like the Manyaï road in October 2016. Is it true?

The pavement crumbled down yesterday at the place called Ebombè, disrupting the heavy traffic along the Douala-Yaoundé axis. This crumbling is due to the collapse of a nozzle (A round concrete pipe that let wastewater flow under a bridge). The news spread n the internet and many images related to the incident were released. However, images showed a road cracked in two are not from Ebombè. They are images from the Bamendjou road.

Indeed, last Saturday, this road which is located in the Western part of the country, somewhere before Bafoussam, coming from Douala, got cracked in two. “The disruption of the traffic on that part on the road was due to a landslide on 80 meters causing one of the road section to fall down three meters”, a camernews.com reporter at the site said.

Regarding Ebombè, the ministry of public works (Mintp) visited the site yesterday. Following this visit, he issued a statement to reassure populations that the workers were rapidly dispatched to repair the damaged road. “Travel cars are moving easily now; public transport cars drop their passengers once they reach the affected part and trailers move in an alternate manner,” the statement indicates. Works are therefore on going.