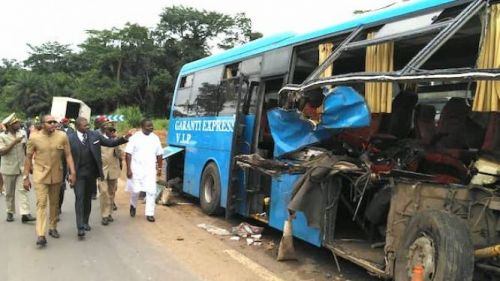 Yes, a Garanti Express bus was involved in a new road accident near Edéa

Early on September 19, 2019, pictures appeared on Whatsapp showing a damaged bus. According to posters, this portrays a new accident involving Garanti Express near Edéa. Is it true?

Pictures of a damaged bus belonging to Garanti Express were posted on Whatsapp on September 19, 2019, in the morning. According to posters, this shows a bus damaged in an accident that occurred in the night around Edéa.

Some users think that these are old pictures posted again but these are pictures of a new accident involving Garanti Express. The accident occurred at night at Ngwei 2 village between a Garanti Express’ VIP bus and a trailer coming from the opposite side, Fritz Dikosso-Seme, prefect of Sanaga Maritime indicates.

In a release published today September 19, 2019, the official reveals that there are 9 confirmed deaths and 8 injured. He added that the state of the dead requires immediate inhumation and that none of them could be identified.

He also presents his condolences to the families affected and asks them to urgently retrieve the remains of their loved ones or those remains will be buried by the commune for public health reasons.