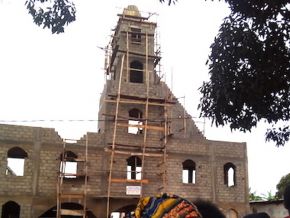 The Catholic Church in Minkan collapsed while 6 ladies were praying. True?

The structure of the small church of Saint Marcellin of Minkan, in Odza district, Yaoundé, collapsed October 17 while 6 ladies were praying inside. The accident killed two of them, Mrs Menkene Apolline in her 40s and Bekono Mbarga Elisabeth in her 50s. The other 4 who sustained quite serious injuries, are currently being cared for in the city’s hospitals. “Two of the injured are much better, according to a doctor,” said Father Adalbert Eloundou, pastor of the affected parish who recalled that the six ladies had gathered at around 4pm as usual for rosary recitation when the accident occurred.

The heavy rain that fell on the city washed away the roof of the Catholic chapel. “This is the roof of an old building of which we launched extension work,” he said.

On Thursday, October 18, the scene was crowded by cops of Odza Gendarmerie Brigade. Dozens of firefighters were also busy clearing the place. They were supported by their French colleagues in Cameroon for training.