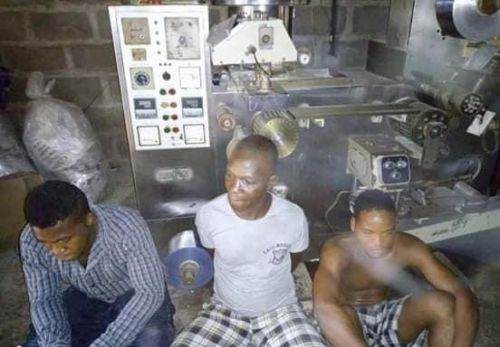 No! These pictures weren’t taken in Cameroon, but rather in Nigeria

Rumors suggest these pictures were taken in Cameroon. True?

Recently, images of a counterfeit drug manufacturing factory have been shared by WhatsApp users with different awareness-raising texts against street drugs. The fact that the location of events is not indicated can be confusing.

Although seizures by Cameroonian customs of counterfeit medicines are quite often reported by the local media (427.3 kilograms of undeclared medicines from 1 January to 30 September 2018 according to a customs report, cited here by www.afrik.com); or even though the Ministry of Public Health sometimes issues alerts on the circulation of counterfeit medicines on national territory, the scene on the images is not Cameroon but rather neighboring Nigeria.

The case was reported by the Nigerian Police Force's Facebook page, which issued a report of the Force's public relations officer, Jimoh Moshood, in Abuja on December 14, 2018.

In this report, the public relations officer explains that the day before (December 13), the intelligence team of the General Inspectorate of Police of Nigeria, working on credible information, stormed and searched a secret factory for counterfeit medicines in the residential area of Ikotun Egbe (No. 2, Okunnenye Street), Lagos State.

During this operation, suspects, including the plant owner and 3 employees, were arrested and large quantities of alleged counterfeit medicines seized.

According to Jimoh Moshood, “the boxes of various counterfeit medicines, large quantities of unprocessed chemicals (...), several machines for the processing, manufacturing and packaging of counterfeit medicines have been found.” The police forces also recovered falsified pharmaceutical papers and plastic buckets of various types. The factory will be closed down today.

Since then, the investigation has continued in order to arrest other fugitive suspects.