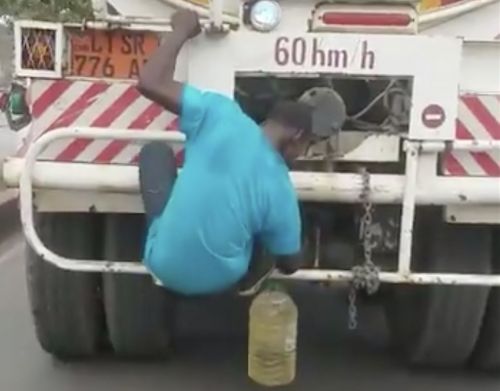 Yes, this picture was taken in Cameroon

Some say this picture showing a man stealing fuel from a truck's tank was taken in Douala, Cameroon's economic metropolis. Is it true?

An image of a man "siphoning" fuel from the back of a moving truck has been circulating on social networks since the end of last week. Online, many people claim that this happened in Cameroon and they are right.

The car's license alone is already a clue. Indeed, the "LT" indication on the plate stands for the Littoral region. In Cameroon, the first two letters on license plates correspond to the region where the driver or the vehicle's owner is domiciled.

The picture is actually from a video published on 17 January on the Twitter account of an Internet user whose username is @ShakesSocrate. The video which totaled more than 26,000 views depicts a scene that took place in Douala. In this short 21-second sequence, one can clearly hear male voices saying, "Welcome to Douala" or "It's full, come down!" addressing the man hanging behind the truck. This practice, however, which is extremely dangerous, is common in the city of Douala.

This is a "theft technique" known to officials of the Cameroonian Oil Depot Company (SCDP), a structure that stores and distributes petroleum products throughout the country. "Generally, it's when the truck is on its way to the depot to be served that the thieves collect remains of fuel in the vehicle's tank. According to sources at the SCDP, the drivers are rarely aware of the operation. Let's emphasize that the firm is only "responsible for products as long as they are in its depots, not outside."