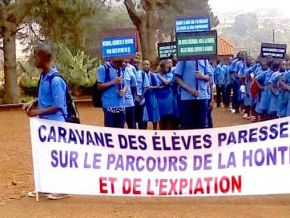 It is said that the school’s headmaster forced them to parade to punish them. True?

On February 16, 2018, Bafoussam grammar high school’s students who had poor grades were forced to parade the school’s public space and environs. They were more than 250 wearing their school uniform and marching with ‘atonement’ signposts. Some teachers were taking pictures and maintaining the order.

“This method is not good at all. Instead of pushing them to change, it can push them to rebel against the education system”, one of the school’s teachers who required anonymity said. “Every human being needs to be respected, being it a lazy student or not”, a journalist said outraged.

Unlike those who think that it is a traumatizing embarrassment for those students, Michel Ngueti, the school’s headmaster thinks that his initiative is a redeeming pedagogy.

Some people think the same and narrate the drastic punishment they received when they were at school. “Nowadays, children are really lazy! The headmaster should have done more than that”, a parent maintained. An alibi to hide the real culprit of the children’s poor performances.