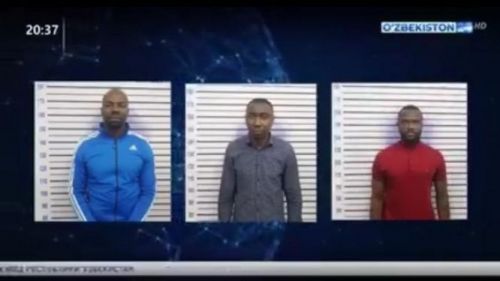 No, the identity of the Cameroonians recently arrested in Uzbekistan has not yet been revealed

Some people claim that they are named Kamdem, Fotso, Kamga, Tokam, Teguia, and Kameni...

According to several Facebook posts, the identity of the six Cameroonians arrested in Uzbekistan are now known. "Their names are Kamdem, Fotso, Kamga, Tokam, Teguia and Kameni, the six Cameroonians arrested in Uzbekistan in possession of a sum of $10 million, all fake bills; that is more than 5 billion CFA francs," the posts read. These are names common in the western region of Cameroon.

While it is true that six Cameroonians have been arrested in this Central Asian country, their identity is yet to be revealed. Only their faces were seen in the report on their arrest, which was broadcast on Uzbekistan's national television last Tuesday. A letter addressed by the Cameroonian embassy in Russia to the Minister of External Relations (Minrex), Lejeune Mbella Mbella, does not mention their identity either.

In this address dated 18 February 2020 and authenticated by sources at Minrex, the acting chargé d'affaires of the embassy, Marguerite Florence Effa Ngamba, informed the minister of the arrest of six Cameroonians in Uzbekistan, former Soviet Republic. "I have the honour to inform you that the official television channel of the Republic of Uzbekistan has just broadcast on 18 February 2020, information implicating a group of six (6) Cameroonians (and not five as some say, editor's note) arrested by the competent services, accused of manufacturing and holding fake dollar bills amounting to about ten (10) million US dollars," she wrote.

She added that the Cameroonian embassy is awaiting the "official notice" of the Uzbek embassy in Russia on this case.