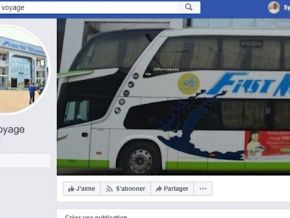 It seems that it is unwise to book an inter-Urban bus via the following Facebook page : https://www.facebook.com/Finexs237. Is it true?

The inter-urban travelling agency "Finexs Voyage", operating along the Yaoundé-Douala line does not have an official Facebook page. Yet, there is a Facebook page cashing on this to scam users.

According to a user, on March 19, he needed to urgently travel to Douala in the morning. Seeing the urgency, he searched on Facebook to find agencies not so far from his place in Yaoundé to book his travel.

He called the said number and a man picked telling him that he could either book for the next bus going from Yaoundé at 9 AM or for the next one going at 10:30 AM.

The man then asked him to send XAF6,500 via Orange Money to book the travel. However, once the traveller came to Finexs Voyage nobody acknowledged this transaction. He was then obliged to pay for another ticket.

Questioned, Finexs Voyage’s management indicates that the traveller was really scammed since it has no official Facebook page but a Facebook search reveals numerous  Finexs Voyage pages.