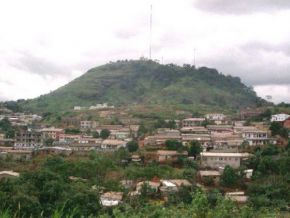 Though it is nicknamed the “city of 7 hills”, does Yaoundé actually have 7 of those?

A much spread legend states that the capital city has 7 hills. Is it true

Some geographers have added Yaoundé to the famous list of cities of seven hills, where are found Paris, Rome, Lisbon, Washington and Pretoria in South Africa.

Just like these other cities, Yaoundé does not actually have seven hills. Of course, the seven emblematic hills here are: Akok Ndoué, Mbog Ndum, Minloa, Ebaminala, Messa, Mbankolo and Fébé. These are situated at three distinct mountains which tower over the city, namely: Mbam Minkom (1295 m), Mount Nkolodom (1221 m) and Mount Eloumdem (1159 m).

However, Cameroon’s capital has far more than seven hills as long as a hill is defined as a naturally raised area of land, not as high or craggy as a mountain. Here is a document dating from 1968 providing details about the geography of Yaoundé’s urban landscape:

Starting from the seventh page of this document, we find a plethora of nameless hills located in the city. The source reveals that the Mfoundi River and its affluents have separated from Mount Fébé, a first group of hills having a height that in some cases exceeds 800 m and where are settled the districts of Oliga, Ntougou, Ekoudou, Bastos and Mfoundassi North.

To say therefore that Yaoundé is a city of thousand hills would be more illustrative. But one must admit that the number 7 has something quite magical to it…