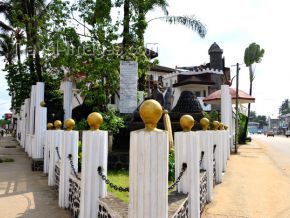 Has Dika Akwa palace burnt down?

Some people claim that this is a video of the fire which devastated the headquarters of Ngondo in Douala on Sunday.

Rumors spread, on Sunday, November 19, 2017, suggest that Dika Akwa palace in Douala has burnt down. However, Mukanda (as the palace is called in Duala idiom) is there with no trace of fire outbreak. Those who are used to the palace can attest that it is different from the building shown in the video; the only resemblance is the paint: they are both white.

According to corroborative sources, it is the video of a car explosion that occured during the night of Saturday, November, 18. The explosion occurred in a suburb popular with revelers, not so far from Dika palace. Indeed, the driver was drinking nearby when his overheated car exploded.

As a matter of fact, many people were distressed when the rumors, of the fire outbreak at Mukanda, broke because it is one of Douala’s mythical buildings. It is also the headquarters of the mighty Sawa traditional assembly: it is the Ngondo which was built after Cameroon’s independence by Prince Dika Akwa Nya Bonambella (1933-1995), an anthropologist, a lawyer, an Egyptologist, and politician.