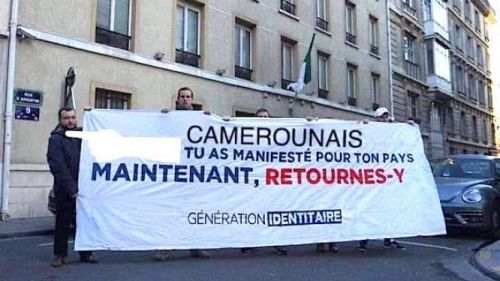 No, this picture is not authentic

A picture shared on social media shows people holding a banner asking Cameroonians living in France to return home. Is the picture authentic?

Recently, a picture emerged on social media. In this picture are four white men holding a banner on which is written: "Cameronians, you have protested for your country; now go back home.”

In fact, the white men in the picture are members of Génération identitaire, a right-wing political movement fighting against "massive Islamisation and immigration."

The real picture was taken on March 19, 2019, in front of Algeria’s embassy in Paris, to protest against Algerian protesters and Algerian-born French who were demanding the resignation of Abdelaziz Bouteflika who has been ruling Algeria for close to 20 years now.

Romain Espino, the spokesperson of the movement created in 2012, wrote a tweet indicating that his movement was in front of the embassy to ask anti-Bouteflika protesters to go back to their countries.

The real message on the banner was: "Algerians, you have protested for your country, now return home.”  In the picture currently being shared on social media, ‘Algerians’ was replaced with ‘Cameroonians.’ It is, by the way, noticeable because the character used to write ‘Cameroonians’ is different from the one used for the remaining message. The white hand indicating an exit was added to hide the ‘Algerians’ visible on the original picture.