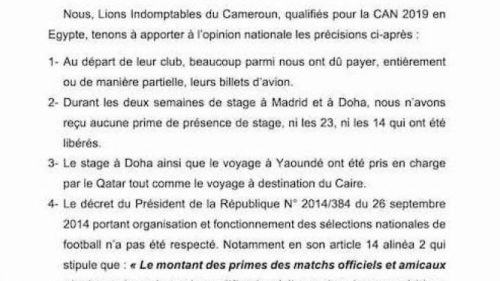 Yes, this letter said to have been written by the indomitable lions is authentic

Rumors have it that the national football team wrote a joint letter to expose the mismanagement of authorities in charge of their department. Is it true?

Have the indomitable lions of Cameroon really written a letter to expose the mismanagement of their team? This is what those who have read the said letter are asking. The answer is: Yes.

Authorised sources at Cameroon’s football federation confirm the authenticity of that document. The said letter reveals that some players paid their flight tickets, fully for some and partially for others, to join their national team.

“During the 2-week internship in Madrid and Doha, none of the 23 players who attended received an attendance bonus,” the players wrote. They reveal that the recent internship in Doha in the framework of the AFCON, as well as their trip to Cairo, was supported by Qatar.

The letter also indicates that the presidential decree n° 2014/384 of September 26, 2014, about the management of the national football team has not been respected. They point out that Line 2 of Article 14 in this decree stipulates the number of bonuses for participation in official competition must be set by the president of the federation and the minister of sports three months before the final stage of an AFCON or an Olympic game.

Gabriel Nloga, communications manager at the ministry of sports, indicates that the players have received XAF20 million bonus each for the upcoming AFCON2019.  “The attendance bonus has been fully paid in the interested parties’ accounts. In case of victory, each Lion will receive XAF54,500,000,” he said.

However, one thing is for sure, this letter was written by the indomitable lions.