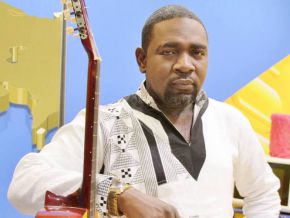 Some say this renowned host is leaving ABK TV to work at Amougou Belinga's channel. True?

During a phone interview, TV journalist Jason Black revealed that since Jean Pierre Amougou Belinga, CEO of media group L’anecdote (which includes TV Channel Vision 4) posted a picture of them together on Facebook, he does not cease receiving calls. The picture itself is baptized Reunion.

Based on the image, some even go as far as saying the main host of the morning show on Canal International signed a work agreement with Vision 4. But this is not true. “I am still at ABK TV”, sustains Belinga.

Since December 2016, when he left Canal 2, he has been acting as managing director of ABK. The question is “where did the rumor start from?, In response, Jason Black says he paid a courtesy visit to Jean Jacques Ze, a friend and former colleague at Canal 2, presently at Vision 4.

As M. Ze arrived in Yaoundé on July 19th, Jason called him to know where he is. After this, Black’s friend invited him to Vision 4’s headquarters located in Nsam. “I was not far from there so I joined him”. Once at Vision 4, the CEO of Anecdote visited the building. And it is after this that the three men took a picture which was later posted by Belinga on Facebook. This is where the rumor comes from. Finally, Jason Black is still at ABK even if he does not hide his interest for Vision 4…