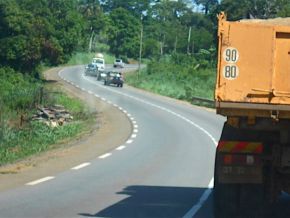 Is the Yaoundé-Douala highway one of the deadliest roads in the world?

The Yaoundé-Douala road has broken the record of 1,000 accidents a year

Indeed, he wrote: “Ranked in 2015 as one of the most dangerous roads in the world by the United Nation, the 397km-long Yaoundé - Douala - Idenau (Nationale N°3) highway has never benefited from a significant maintenance since it was built 30 years ago”.

Some people thought he lied by saying that the Yaoundé-Douala road is one of the most dangerous in the world.

But in fact, the ex-minister was only wrong on the date of the UN research. He is only restituting the verdict of the UN which ranked the Yaoundé-Douala road as one of the deadliest roads in the world in 2014. That year, on a total of 3,008 accidents, there were 1,000 on this axis which is part of the Douala-Bangui and Douala-Ndjamena corridors.

Michel Ambassa Zang explained that is the consequence of the worrisome state of the road. He further mentioned a report released by the ministry of public works in 2015 which indicates that “90% of the segments of the Yaoundé-Douala road is in a bad state. For example, most of the 360 nozzles are about to crumble”.