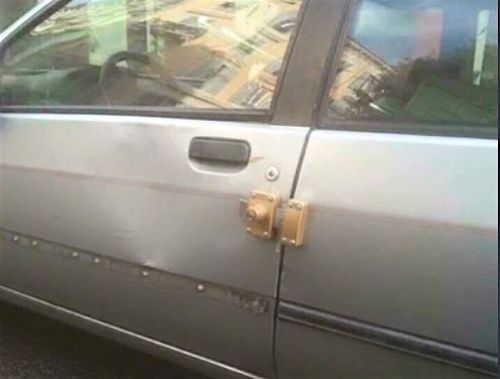 No, this image was not taken in Cameroon

This funny picture was reportedly taken in Cameroon. True?

This image which was buzzing on social networks since yesterday features a car with a door lock on its door. On the Facebook page of a well-known Cameroonian discussion group, the person who shared the picture captioned it “if you succeed in understanding how people work in Cameroon then you’re a fool”, as to say that the image was made in Cameroon and shows the car of a Cameroonian.

Well, that's not true! In reality, this image has nothing to do with Cameroon. Actually it’s an “internet meme” which is an image that spreads, often as mimicry, from person to person via the Internet. Then, it’s difficult to identify the exact place of origin. It has widely been used on twitter since 2015 or on some buzz archive websites, as well, or infotainment.

On twitter, for instance, it is mainly North African expatriate populations who publish the image to make fun of rustics (individuals who come from the countryside).