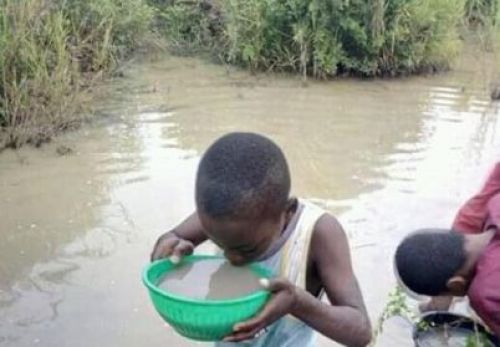 No this image was not taken in Cameroon

Rumors suggest the picture showed a river in Cameroon. True?

Cameroonian Facebook users shared a picture showing a little boy standing in a dirty river and drinking (or pretending to drink) some of the water he collected with a green-like bowl. It is said the image was taken in Cameroon. Well, that’s not true!

Although there are rivers looking like the one pictured, due to pollution, in Cameroon, the one in this picture is not in the country. It was first posted November 19 on Facebook and twitter by Ghanaian users calling for the government to help people in Akpatoeme, a community of four villages located in Ketu North district, Volta region.

According to information in some publications, this community does not have drinking water and the only source of water that people share with Fulani shepherds’ cattle is not safe for consumption, exposing people to various diseases.

In fact, the population of Akpatoeme has a borehole, which is the only source of drinking water supply. At the time this image was posted, the facility was down and people were struggling to raise the necessary amount to make it operational again. Details on the news are relayed on mynewsgh.com. People in Akpatoeme are mainly farmers who live off cassava and maize production.