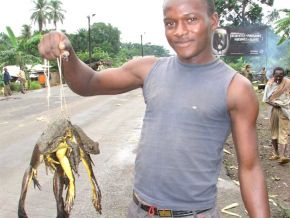 People do eat frogs in Cameroon!

It seems that it is a key ingredient in some foods. True?

There are plenty frogs in Cameroon. By the way, the country’s frogs are reputed to be the biggest in the world. People call them goliath or giant frogs and, they are mostly found in the Coast, the Southwest, and the South.

They are used to cook various meals. In case the giant frogs are not available, the middle or small ones are used. An internet user who tasted foods cooked with frogs revealed that those frogs are hunted at night and sold alive early in the morning at roadsides.

People who are fond of that meat say that it has the same taste as shrimps. Well, you can taste and see but you should know that giant frogs are somehow an endangered species. There is even an association to protect them in Cameroon so, Beware!