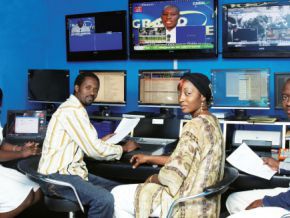 Canal 2 may have purchased broadcasting rights from Canal+ Overseas

It is exact. On September 21, 2017, some online media announced that Canal 2 has purchased broadcasting rights for the Champions League and the Europa league from Canal+ overseas. The Cameroonian broadcasting channel has in fact confirmed the news itself during its 6PM news and on its Facebook Page (around 4PM and 10PM) that day.

It is therefore official; a first in the history of the broadcasting channel. From September 27, 2017, viewers will not only enjoy the UEFA Champions League, without fearing being interrupted by encryption, but also the group stage of the Europa League while waiting for the round of 16, of 8, the quarter-final, the semi-final and the final which will take place in May 2018 (subject to change by the UEFA).

Agreement for broadcasting rights was signed on September 20, 2017, by Francois Deplanck, Channels and contents Director at Canal+ Overseas, and Eric Fotso, Managing director of Canal 2, in Canal + overseas’ offices at Boulogne Billancourt in France.