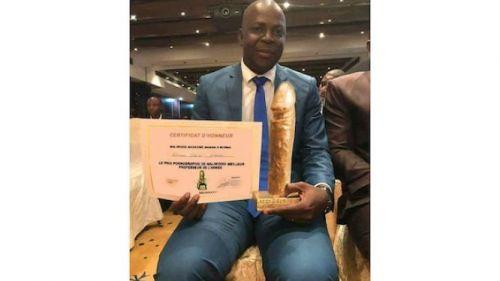 No, the man in this picture is not Cameroonian but a Malian

Some say that the man in this picture is a Cameroonian who received a pornography award in the US. Is it true?

An image showing a man holding a phallus-shaped award is currently being shared via WhatsApp in Cameroon. According to the caption accompanying this picture, the man is a Cameroonian who supposedly won a pornographic award in the United States. "The Cameroonian Gaspard Fouda Abena, voted best fuck in the USA. Congratulations champion; he shot 4 pornographic films in 4 different studios, 1 hour per film on average each day. A champion remains a champion," a comment under the picture reads.

Actually, the post was published on May 4, 2019 in a well-known Cameroonian group on Facebook, and shared since then on WhatsApp. The truth, it turns out, is that the man in the picture is not Cameroonian, but a Malian.

A reverse image search on Yandex allows you to find this photo online. Among the results of the search, we find this article (in English), with the title: "Etienne Farakoï: A Malian teacher receives the Pornography Award and the Maliwood Teacher of the Year Award."

This name is inscribed on the "certificate of honour" that the winner holds in his right hand (on the picture). "Magazine awards Mr. Etienne Farakoï (editor's note: the third name is illegible) with the Maliwood Pornography Award/Best Teacher of the Year," the certificate reads. This suggests that the prize was awarded in Mali, not in the United States. Several websites claim that the prize was in different locations.