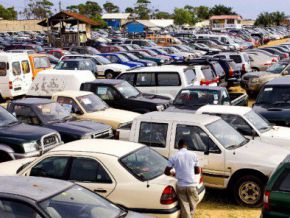 It seems these vehicles will be auctioned, because they were abandoned by their owners. True?

Eternal Renault 2 enthusiasts have something to celebrate. Since last Friday, the Cameroonian Customs administration has been selling the vehicles cluttering its port. Officially, over 2,000 cars are available on auction with an announced starting price of FCfa 200,000; though interested individuals should have at least FCfa 1 million available.

The first auction sales only resulted in the sale of 11 cars on Friday 17 February. Which generated the ire of potential buyers, who braved the sun and paid the entry fees for the launch of this operation. Operation which had been announced since December 2016 in a sale notice published by the Managing Director of the Customs administration.

For this institution, this is about getting rid of vehicles which have spent over 3 months at the autonomous port without being cleared by their owners. However, since the sale notice, many requests have been made by owners to sort out their situation, we learned from Tafauh Yombi, General auction Reporter. The date for the second auction has not yet been indicated.