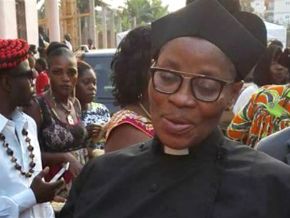 It is said that some years after giving her life to Christ, the singer started singing again, using sexual language. Is that true?

Three years after her conversion, K-Tino is back into the musical world with the kind of music which was key to her success:  lyrics that glorify human reproductive organs using a bikutsi rhythm well composed with drums predominantly, sexual comments and her vocabulary in Ewondo.

Indeed, in her new single, curiously titled “WATAFUFU”, K-Tino or “la femme du people” (as she liked to be called) says these French words to her man: “Tu me donnes la vie. Tu me donnes la Nyass... Tu me donnes le truc…” meaning: “You give me life, you give me Nyass [notes: Cameroonian word to say make love]… You give me the thing”

During the about five minutes that the song lasted, those who have heard the titles “Ascenseur”, “7ème Ciel”, among other sexualized contents published by K-Tino, will easily find the similarities. Her fans are praising her return. Those who were doubtful about her conversion comment that they were right to doubt and invoke the saying that goes by “leopards don’t change their spots”.

In 2014, K-Tino said that she gave her life to God and would move away from her life before conversion and obscene songs. In 2016, she was even named an evangelist in Paris, in a church which is as curious as the pastor général Jean James Nkoundou.

Well, two years later, here she is reverting to her old habits for the delight of bikutsi lovers and for the unhappiness of those who are against odes to sex.