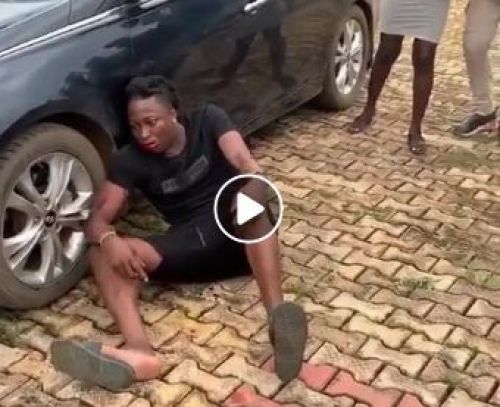 No, the guy in this video is not a Beninese scammer but an actor on set of a Nigerian film

Facebook users claim that this video is showing a Beninise who died because of his occult practices. Is it true?

A Facebook page well-known by Cameroonians posted a video that has already been watched more than 3,900 times. According to comments, the guy in this video is a Beninese scammer who used occult methods to get rich. The guy in all black attires is filmed barking like a dog, blood in his mouth and at the end, he collapses on the ground.

In fact, the video was posted online about two months ago and was widely shared via youtube, facebook and Instagram. Most of the comments at the time claimed that he was a scammer (Yahoo-boy as they are called in Nigeria). According to some of the users, he is a Nigerian, for some a Nigerien, another group claimed that he is a Beninese. Almost all the comments were warning young people against using occult practices to get rich.

A reverse search led us to Akinmolayan Habeeb’s Instagram page. He is the man seen in the video and, in fact, he is a Nigerian actor. He posted the video, which is an extract of the film he shot on July 7, 2019, with the following message   "YAHOO BOY BARKS TO DEATH IN LAGOS... SAY NO TO YAHOO PLUS + ❌❌❌ cc @iamakeemadeyemi @showolamilekan@dhamillionaire @babajejevision @kehindeadeyemifilms".

The film is OLAJIMI, produced by Damilola Adekoya. He is tagged in Akinmolayan’s post. The posts on Facebook and Instagram stress that  "(IT’s A FILM) OLAJIMI Produced by @dhamillionaire."

On August 21, 2019, a French fact-checking website AFP also contacted a member of the crew who confirmed that it was indeed an extract of the film OLAJIMI.