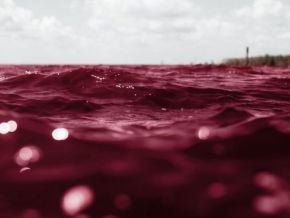 Somes say there was a blood River in Yassa, Cameroon

In the third district of Douala, it is rumored that a "biblical phenomenon" took place last August 17th.

This is one of the most sophisticated rumor going around in the country since the beginning of 2017: a blood River in Douala. In fact, on August 17, 2017, the unknown author of the rumor gave specific details online.

“The place, Yassa as it is known, located behind the Alexor hotel, has shown signs of the divine presence in Cameroon, meaning that God loves our country. At first, the people living around the Alexor hotel thought the phenomenon was due to a chemical spill spurred by heavy rains. But not at all!”, the source claims.

“Traditional and religious authorities who first arrived on the site were bold enough to take a sample of the mysterious red liquid. They all concluded that it was blood. Asked if it was human blood, a chief responded: my daughter, vampirism is at night. This is our ancestors expressing their anger at the fact that they are no more honored as they should before any construction works such as in the case of the Japoma stadium. They are threatening to shed blood,” the author of the rumor added. Only issue is that the photo attached to the statement, a lie that is, is that of a blood river that flooded the streets of Dhaka (capital of Bangladesh) on September 15, 2016.

According to French broadcasting station LCI which had released an article regarding the flood at the time, the streets were filled with a thick blood river as a result of the numerous animal sacrifices during the Eid al-Adha feast. “Dhaka’s authorities had tried to prepare for the event setting aside about 1000 specific zones for the sacrifices, having insured that blood would be washed away there, in a city with close to 7 million residents. Despite these precautions, many have made sacrifices in the streets, thus causing the blood river," LCI reported. It therefore did not happen in Cameroon, but in Bangladesh.