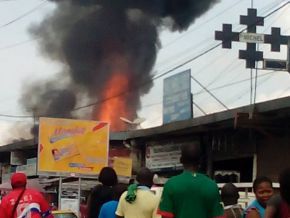 Was there really a bomb blast in Douala this Friday, September 22?

Is it true that Mboppi is under strict surveillance?

Earlier this Friday September 22, 2017, there has been an explosion of a homemade bomb somewhere around the Société Camerounaise des Dépôts Pétroliers (SCDP), in Mboppi, Douala. The SCDP is a strategic location where tons of kerosene, gasoline and some other oil products are stored. “We found a gas cylinder on the spot. So, the apparatus was put together on the spot,” Samuel Ivaha Diboua, governor of the coastal region, noticed with bitterness at the site sometime after the explosion.

He condemned this deed he qualifies as “criminal and terrorist”.  He also warns that the culprits will be hunted. “Those are methods we all know. They - the culprits- did this at the wrong place because we are in Douala. Nothing remains hidden in Douala,” the governor continued angrily.

Actually, since this morning, Cameroon seems to be under great tension with many protests in the English speaking regions of the country (North-west and South-west) and now the explosion that occurred in Douala.

Meanwhile, Paul Biya, is in New York where he is attending the 72nd general assembly of the United Nations (UN).