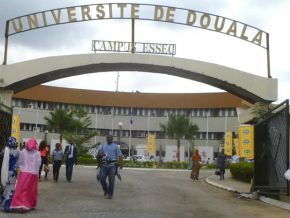 It is said the teachers’ strike exposed the lack of decent toilets within the main campus in Douala. True?

Since last November 21, some lecturers of the University of Douala are on strike. One of their demands is the provision of decent toilets within the university. Within the teaching complex, there are toilets but these are either not taken care of or poorly maintained. As a matter of fact, a student revealed that some of them were closed in 2015 because they were not maintained. The strike will be maintained until to November 26, 2017.

The insalubrity is decried by members of the coastal session of the syndicate of Cameroon’s higher education teaching personnel (Syndicat national des enseignants du supérieur- SYNES).

The strikers also require the improvement of their working conditions, water and the delivery of the premises under construction as soon as possible. Meanwhile, outraged, Dr. Jeannette Wogaing Fotso said, that  "the officials of the University of Douala received eight cars on Wednesday, November 22, 2017, at the doctoral school. A V8, two Fortuna and some RAV4. With no pun intended, these cars are estimated at CFA240 million while we have no place to ease ourselves". For the time being, François Xavier Etoa, the president of the university, is quiet.