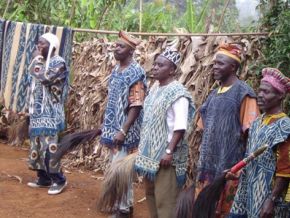 Was Ndop only worn by kings and notables?

It is said that this heritage fabric of people in West-Cameroon could not be worn by everybody. True?

Nowadays, traditional attires have been democratized thanks to stylists and designers. Ndop is one of such attire which was assimilated by modernity.

In pure Bamiléké tradition, the blue attire with geometric patterns and white artworks is only worn by kings and princes. Such revelation is made by Philémon N. (borrowed first name), member of a traditional secret society of Balengou (one of the indigenous of West-Cameroon).

Designed as floating skirts, loose dresses or traditional attires, Ndop is worn during some traditional parades or rituals by “dignitaries who hold a title in the community or an important traditional position”, confirms Hervé Fokoua from Bafoussam.

However, this traditional attire has left the exclusivity of royal palaces and is introduced to fashion stages. In 2012, the renowned stylist Martial Tapolo has indeed used it for one of his fashion lines. Some young fashion designers have also used it.