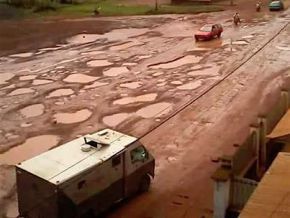 Could this image really be from the Bafousam festival ground?

People say that this picture depicts the actual state of the parade route in the regional capital of Western Cameroon. True ?

When you go to Bafousam right now, this is not exactly what you will see. “Currently, under the leadership of the ministry of Housing and Urban Development, there are works to lay asphalt on the urban road of the capital of the Western region. So, some filling-in was performed along the road that passes through the festival ground ahead of serious asphalt laying surely”, a journalist, working in that city declared.

Nevertheless, the festival ground at Bafousam was in the state depicted in the picture, being shared on social media, some weeks ago. There were potholes and puddles on both sides. Despite some road patchings, this road is still muddy.

“This is the sad reality of a regional capital previously ranked as the country’s 3rd city!”, Hervé, a resident, lamented. It is true that since a decade, Bafousam did not appear under a good day so that people nicknamed it, rightly or wrongly, “ville poubelle” (the city of wastes)