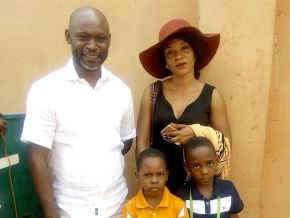 Did Salomon Olembe have a road accident in Marseille?

It is said that the former defensive midfielder of Cameroon’s national football team, les Lions indomptables, is actually between life and death. True?

Salomon Olembe was in Cameroon On January 19, 2018, at the time he was announced under the wheels of a car in Marseilles, France.

According to a Facebook post by his brother, he was there for the funerals of his elder sister.

He was with “the whole family here in Cameroon on Saturday, January 20, 2018, to bid farewell his elder sister Bindo Marie Claire who has brutally left us on new year ’s eve”, explained his brother with pictures as proof.

So, the double AFCON champion (AFCON 2000 and 2002) is safe and sound. Obviously, he is enjoying his retirement.