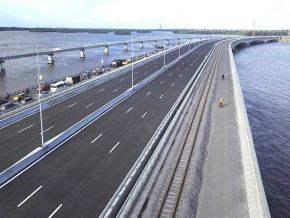 Is it really an image of the 2nd bridge over the Wouri River?

A nice picture of the second bridge over the Wouri River has been circulating on the internet over the past four days and, some people think it is a fake image. Yet, this is the real deal and it was taken by “a drone of the Ministry of Public Works”.

Aerial views are by almost always spectacular. That said, this 800-meter-long infrastructure is not yet open to cars and heavy vehicles. For the time being, users must content with the first bridge over the Wouri (built between 1951 and 1954) and its jams.

The road, which runs from one bank to the other of the Wouri River, will be open to the public on October 31, 2017, according to the Minister of Public Works, Emmanuel Nganou Djoumessi. He said so in a recent edition of the government daily "Cameroon Tribune". The Minister forecasted that the other developments of the road (road sections and ramps) will be completed by June 2018.

The project which began in 2013, will improve transportation between Cameroon and the countries of the sub-region, along the Eastern (towards Yaoundé) and Western (towards Buea, Bafoussam, Bamenda) corridors.