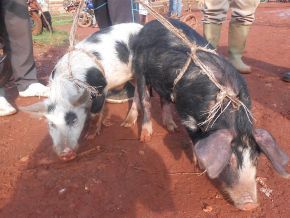 Is Dschang really the capital of pigs in Cameroon?

People claim that Dschang is the production and consumption hub of Pork. True?

Dschang inhabitants are quick to choose between pork and chicken meat. Indeed, it is a known fact, in Cameroon, that west Cameroon’s former regional capital is the fief of pig farming and consumption.

Actually, a study released in 2015, by the research institute for agricultural development, revealed that Cameroon’s pig industry is mainly supplied by the north and far-north regions as well as Chad’s border regions. This said, there are many factors which made Dschang, the symbolic capital of pigs.

First of all, before the epidemic “Peste Porcine Africaine (PPA)” in 1982 due to which pig farming was brought to the northern region, the western region was the hub of pig farming in Cameroon.  Secondly, there are many pig farmers and sellers in Dschang.

At the livestock market, pigs are well sought after for social events (marriage, dowries, twin birth ceremonies, sacrifices to ancestors…).

Mathurin Azeufack revealed, on his blog " ledschangais", that people in the market refer to pigs as "Beau regard" or “sous-préfet”.

The third factor is the Dschang university helped popularize pigs by making it, the mascot of their entertainment club.

The said mascot did have a name: Paa Donfaco. And, when Paa Donfaco died in 2016, the students of the university organized a proper burial for it! An unusual tribute which crossed borders. Yet, Paa Donfaco was replaced by another pig.