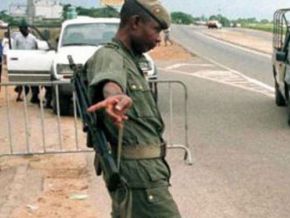 Yes, despite the free-movement agreements, there is still police hassles within CEMAC

Policemen at the different borders still harass traders who travel by roads for visa in the six member countries of CEMAC.

Unlike what was expected, Cemac member countries’ decision to open their border to fellow community members is not yet entirely effective. Indeed, there is still police hassles which limit the free movement of persons in violation of the additional act of June 25, 2013, related to the suppression of visa for CEMAC residents travelling within the community.

Indeed, during the fifth meeting of the steering committee of the economic and financial reform program held in Douala on June 22, 2018, Daniel Ona Ondo, president of the CEMAC commission declared that, there were police controls here and there. He added that the population needs to be educated for the good implementation of that free movement policy.

“We have sent money to Interpol to help us establish secure passports. We will strive to secure the various transit points. This is a work we will do but it won’t be done overnight. We need to change our mentality and agree to live together. It was successful in West Africa and there is no reason it could not be done in Central Africa”, he said.

Let’s remind that according to the additional act, any member of one of the six CEMAC member countries with a valid ID or passport can travel to the other countries of the community without requiring an entry or exit visa. This decision holds true for stays lesser than three months.